Behind the Open Door with Sally Gallot-Reeves 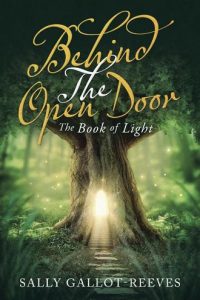 Everyone experiences a sense of not belonging at some point in their lives.  Imagine being a child with sensory gifts that most other people do not have.  How would you express yourself?  How frustrating would that be for you?  Not only as a child, but as you grow older the repeated heartbreak of not being able to make people understand or believe you must be soul-draining.

Sally Gallot-Reeves’ new book Behind the Open Door takes you on a journey with Cassie, a young girl of extraordinary talents and perceptions that go well beyond typical human awareness while tugging at your heart as a reader.   You feel the need to intervene and help her, make those around her ‘get it.’  Experiencing your way through the story with Cassie is the only way to see it to the end and this easy read is well worth it.

Sally had been thinking about Cassie and her story since college.  In her writing, she pulls from her professional experiences in child behavior / psychology and later as an ICU nurse where she got even more in tune with children and families.  In the latter role she was made aware of many patients that had out of body experiences, sometimes while she was in the room.  These were very powerful moments that positioned her to be strong both emotionally and spiritually.  All of these events would weave their way together as roots, growing her spirit, energy and abilities to see other dimensions as a possibility.

As Sally transitioned away from her nursing career and moved into consulting, she decided it was time to hone her skill so she could tell the stories welling inside her.  She took a writing course from Hay House and this is where her book, Behind the Open Door, and the soon to be published Soul Garden Discovery began.

Once she got on track, it took about two years.  Ideas would come to her and she would write a few pages and put them aside.  Much like a deck of cards that have been strewn about, she would later take on the task of pulling all those pieces together and put them in an order that made sense.

When Sally lost a year to extensive back surgery, her recovery provided ample opportunity and time to devote to that process.  She started writing, and writing, and writing…  The characters became real, they took on their own personalities and characteristics.  Sally was breathing life into her scattered notes, reality was setting in that this would be a 5-book series.

Sally feels like it is the perfect time in our world-culture to bring awareness to the concepts that Behind the Open Door brings forward.  We are in such a midst of change that we are more open to new ideas and ways of thinking than ever before.  There is something about Cassie’s journey that brings our own personalities out as we interpret her relationships and use our imaginations as we follow along.

If there is one thing that Sally could say that this book demonstrates emphatically, it is that ‘we don’t know what we don’t know.’  We must demonstrate acceptance and love despite not knowing or understanding what others are going through.   Cassie just does not know how to pretend to be anything but herself.  We could all take a cue from her and use our courage to be ourselves and follow our own intuition.  Sometimes amidst our own confusion and frustration comes that person that shows us love and acceptance. Wouldn’t it be great if we could be that person for someone?

You can find Sally’s current books at Amazon:

Behind the Open Door

Between Shifts – a collection of vignettes in poetry.